In 1896, Frank Cushing, as part of a Smithsonian Institution expedition, uncovered more than 1,000 wooden artifacts from a small pond in what was then called Key Marco (now known as Marco Island.) Among the items discovered was the now-famous Key Marco Cat.  These artifacts are said to be some of the finest prehistoric Native American art in North America.

With the development of Marco Island by the Mackle Brothers there is little doubt that many similar invaluable pieces have been lost forever. When Marco Island’s Septic Replacement Project was started an opportunity was seen to look for more of these artifacts before they were destroyed and covered over by dirt and asphalt.

As the project was started in the Estates section of the island Advanced Archeology Inc, out of Fort Lauderdale, led by Joseph Mankowski, was hired to oversee all that might be unearthed in the process. A property owner on Addison Court, on the south end of the island, agreed to have the dirt that was dug from the street stored on her land for a more thorough exploration of the spoils of the dig. This land was directly across from an area where it was known that Calusa Indians disposed of items they no longer had use for. As a result it was assumed it might be rich in pottery, weapons, tools and any other detritus left by the tribes. Thus began The Big Sift in March of 2013. Twenty piles of dirt were carefully labeled as to what area they came from and the public was invited to participate in sifting through the piles looking for prehistoric artifacts over a 3 week period. All the sifting was closely monitored by the archaeologists. Nothing as dramatic as the Key Marco Cat was found but many items of interest were discovered and hundreds of people, both locals and visitors, were given the opportunity to learn about archeology and the Calusa Indians living on Marco Island while experiencing the thrill of the hunt.

Click on an image to see a slide show 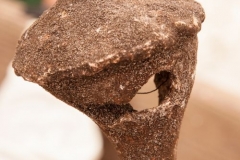 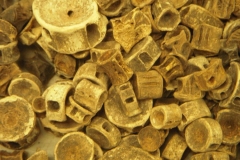 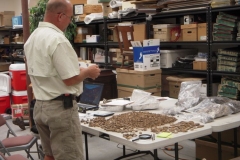 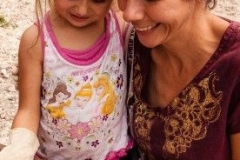 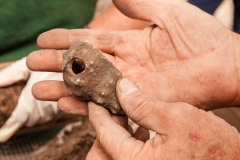 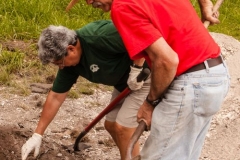 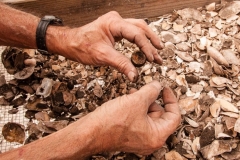 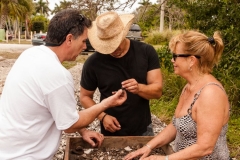 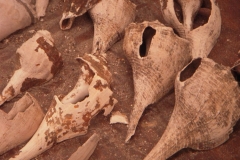