A millwright by trade, W.T. Collier left his native Tennessee to build mills in Florida. After sailing around much of the state with his wife and children, they arrived on Marco in 1870 and built a home, first on what is now Hideaway Beach, but later Old Marco. The family suffered through hurricanes and fires, yet the family made a living by growing vegetables and shipping them along the Florida coast. Some consider him the “Father of Marco Island.” 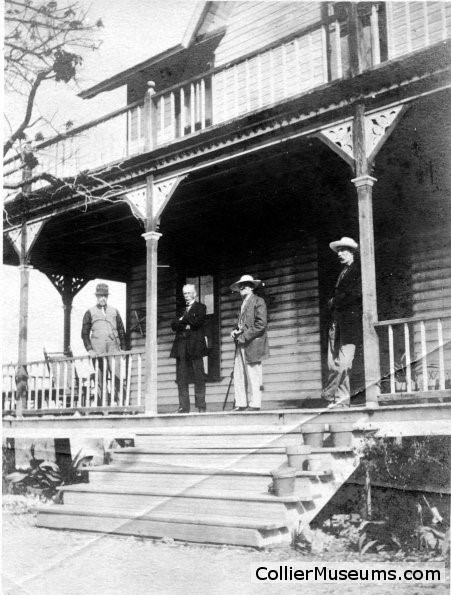 Born in 1852, W. T. Collier’s son, known as Captain Bill, married and settled initially in Ft.  Myers. When he moved to Marco, he planted coconut palms; farmed vegetables and hauled them south to Key West and points north; was a country commissioner; and opened the first general store. Significantly for future tourism, he and his wife turned their home in Old Marco into a boarding house and in 1896 opened a 20 room hotel– the first hotel on the island—which featured a two-story outhouse, mentioned in Ripley’s Believe it or Not. Known then as the Marco Hotel, it still exists today as the Old Marco Inn. Captain Bill also invented a clam dredge that was used to harvest clams from the bottom of bays and load them on boats for processing in Marco and Caxambas where there were clam factories operating that employed many islanders.

Figure 1 Pictured here is the Marco Hotel, this first hotel on Marco Island. Captain Bill is second from the left. (Courtesy of Collier County Museums) 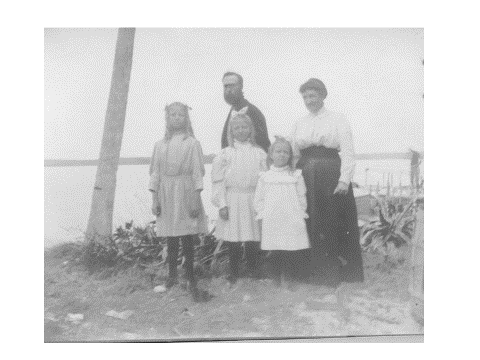 Both homeopathic physicians, Dr. Charles Louis and Dr. Mary Olds arrived on Marco Island about 1901-2 with their three young daughters, Orida, Saloma and Rosalie. Besides practicing medicine, Dr. Olds was also the Justice of the Peace, the coroner, and the dentist. Like Captain Bill’s family, the family turned to agriculture to help support themselves. They specialized in fruits, especially guavas, and cultivated many varieties of mangoes as well.

From a letter by Dr. Mary Olds to her Smith College friends, “Class of ’84”:

“Planting Mangoes,” September 20, 1914,“The ground was very wet and soppy from the hard rain . . .& we got our feet soaking wet, first thing. It was so wet & muddy leaning down working that I took off my skirt & petticoat– there was no one to see me except Orinda . . . We both worked hard all the afternoon putting out the mangoes. I got desperately tired, but worked until they were all put out. Then we two tired creatures went back to the creek where the boat was & behold! . . . The tide had gone out & left the boat dry. There was about 2 inches of water. . . We took off our wet shoes & stockings & went in, we lifted & pulled & pushed & after quite a while got it one boats length & six lay before us. I voted that we walk home through the swamp, no matter how high the water was & come back the next day.  . . We staggered through the swamp home. . . And I coming down the chicken pox all this time. (From Island Voices, by Elizabeth McDonald Perdichizzi. p.74)

Captain Bill is also directly responsible for Marco Island’s international recognition as one of the most important archaeological sites in North America. While digging on his property in 1895, he found various ancient artifacts, and the Pepper-Hearst Archaeological Expedition, led by Frank Cushing and sponsored by the University of Pennsylvania and the Smithsonian Institution, was soon launched The scientists eventually found 2,500 artifacts, including the famed Key Marco Cat, a 6” half-human, half-panther figure.

Cushing wrote in his diary June 5, 1895, “Excavations . . . . revealed within a few hours, net pins, seine stays, small fragments of netting, rope made of palmetto and agave fibre, and the like, as well as burnt thatch, a long and beautifully finished spar or post, fragments of a burnt mud hearth and of pottery, some highly finished wattling plummets and sinkers, two beautifully shaped fish clubs, 5 mounted busycon shells, one of which was edged to serve as a [belt] several of the shell funnels which proved to have been mounted on handles as spoons, many necklace pendants, etc. etc.”

Caxambas village was on the south side of the island, with the highest elevation in southwest Florida. Arriving there in 1904, Jim Barfield soon opened his Mercantile Store and became postmaster. He’s also credited with convincing the E. S. Burnham Clam Company to open a cannery in Caxambas in 1904.  Barfield also farmed, raised and sold pineapples, and subdivided part of his land and sold lots to early “snowbirds.” He built a hotel on the highest point and operated it under the name the “Heights Hotel.”

Tommie Barfield, the Queen of Marco 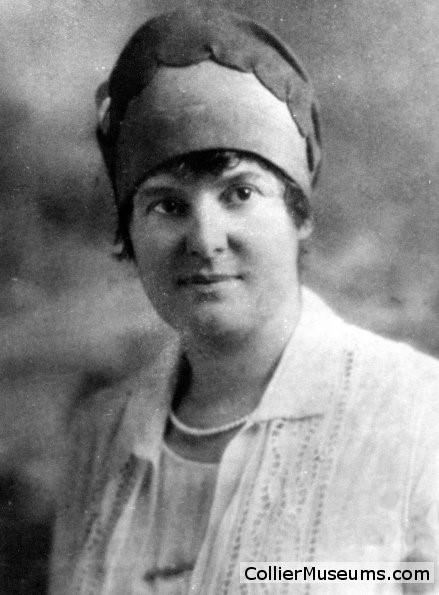 In 1906, Jim Barfield married Tommie Camilla Stephens,the daughter of another pioneering family. She not only worked with her husband at their Heights Hotel (opened in 1908), but was also a formidable advocate for the development of Marco Island’s roads and schools, and became the first superintendent of Collier County Schools. 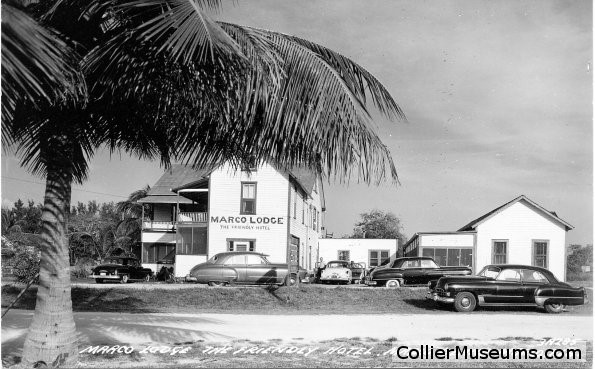 Goodland was the third village on Marco Island; the earliest settler there was Johnny Roberts, who named the island for its rich soil. Later, Samuel Alexander Pettit bought his property rights. The Pettit family eventually sold some of their land to the Barron Collier family. The village was not developed by Deltona Corporation in the 1960s, and thus it retains the unique flavor of an old Florida fishing community.

Figure  9 The Old Marco Lodge (as seen in the 1950s) which was moved to Goodland and remains a popular restaurant today. (Courtesy of Collier County Museums) 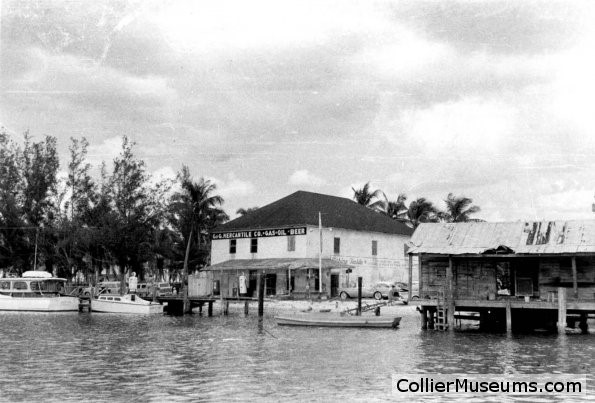 With the only post office and store, Old Marco was vital to the island and nearby communities, such as the one in Little Marco (now East Naples). Access to Old Marco was originally limited to boats.

Figure 10 Old Marco Village as seen from the water in the mid-1950s.   (Courtesy of Collier County Museums)

Frank Watts Hall, a teacher from the Little Marco settlement, recorded the perils of sailing to Old Marco village in his journal, 1898:

“After Sunday school we all went to the beach were we stayed for two hours or more gathering shells . . . The wind was furious and we had a good time sailing today.  Coming up Little Marco Pass we had only a muttonleg sail but the boat nearly ran under. The water came in once over both bow and stern and at another time a wave rose high up one side striking my hand and sending a shower over us all. The boat rocked so that we all expected to be capsized . . .but we stayed on top. When we reached Hall’s Bay, we had a bad time “beating” through it. The waves drenched us all and we were kept bailing continually. While coming through the “Little Creek” we met Reece and John Demeritt on their way to Marco with two deer which Mr. Kirk had killed. Reece told me he had secured a twelve foot gator and that he had brought the head in for me. We came through Henderson Bay at a tremendous speed. The gator’s head is a huge one and I have spent the evening in taking the flesh off it. . . .” 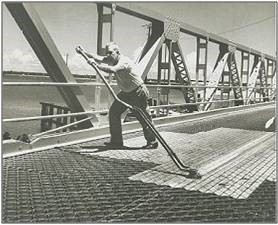 In 1912 a one-car ferry began to bring cars from U.S. 41 (now Isles of Capri) across the Marco River to Old Marco. In 1938, a swing bridge, formerly used in Fort Myers, was shipped and re-assembled at Goodland which eliminated the need for the ferry crossing in Old Marco. The remains of this wooden bridge can still be seen today.

Figure 11 Goodland Swing Bridge and Ivan Burley, the bridge tender, opening the bridge by inserting the “key” and walking around 20 times to turn the bridge for boat traffic to pass. (Courtesy of Craig Woodward)

The E. S. Burnham Company from New York opened a clam cannery in 1903 which operated at Caxambas until a hurricane sank the clam dredge in 1929. 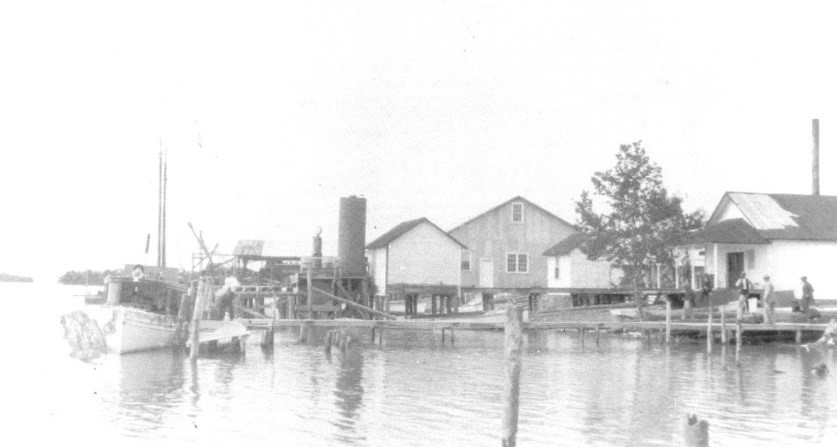 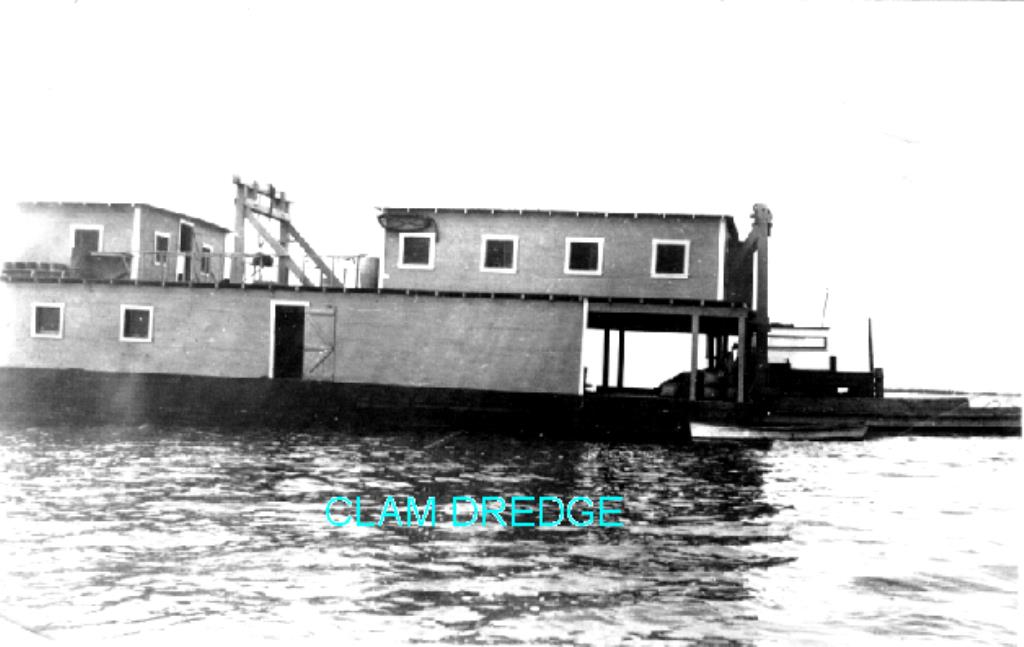 Figure 13 Clam dredge designed by Captain Bill Collier in 1909 and built in Tampa.  Mr. Burnham leased the dredge from Captain Bill and utilized it to gather clams for the Burnham Clam Factory (Courtesy of Collier County Museums)

Doxsee Clam Factory started operations at Old Marco in 1910, but the factory was destroyed by a hurricane in 1932.  The clamming industry employed hundreds of people for many years and was the mainstay of the economy on the island. 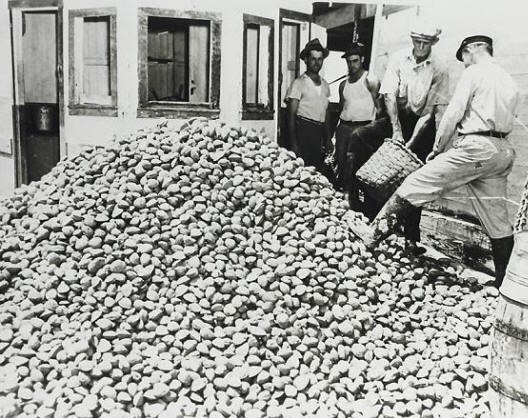 Figure 14 The “carry-away boat” took the clams that had been harvested to the cannery on Marco. (Courtesy of Doxseelegend.com)

To meet the needs

of the clam industry, the Atlantic Coast Line Railway extended service to Marco Island in 1927; a trestle was located near where the Judge Jolley Bridge is today, and a turn-around (depot) was in the middle of the island, near the current Country Club. Making two trips daily, the train would deliver goods from the North and return with clams, beeswax, and island produce, but service ended. 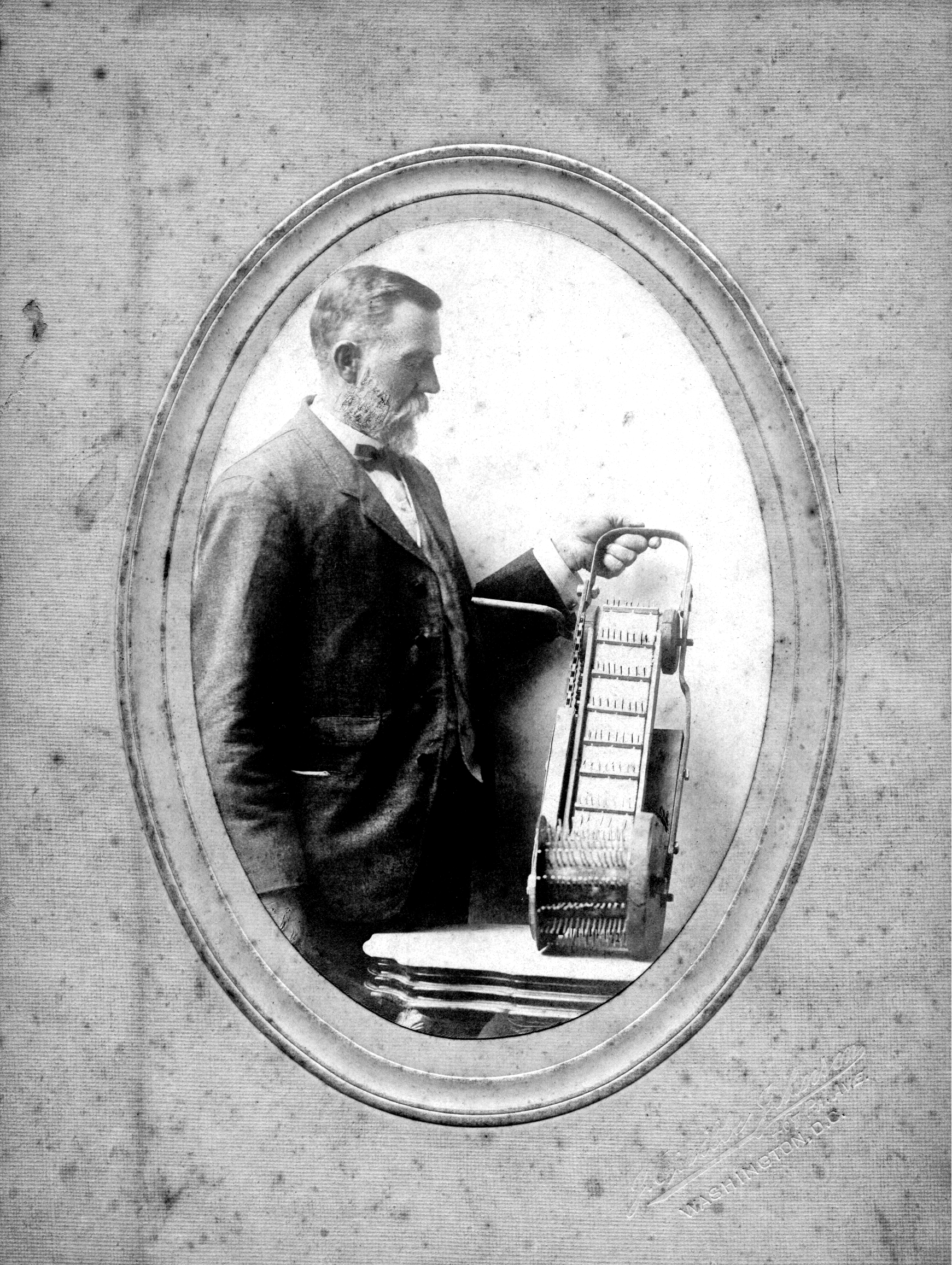 W. T. Collier is often credited with inventing a clam dredging machine which allowed clamming in deeper water and increased production. Unfortunately, this may have led directly to over-harvesting which along with two hurricanes, brought about the demise of the clam industry on Marco Island. 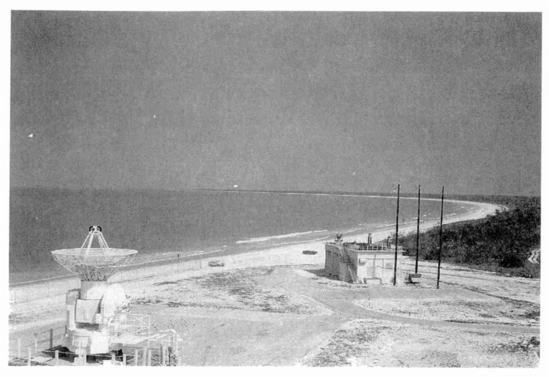 Figure 17 Missile Tracking Station on the south end of the Island and the current location of Cape Marco. (Courtesy of Craig Woodward) 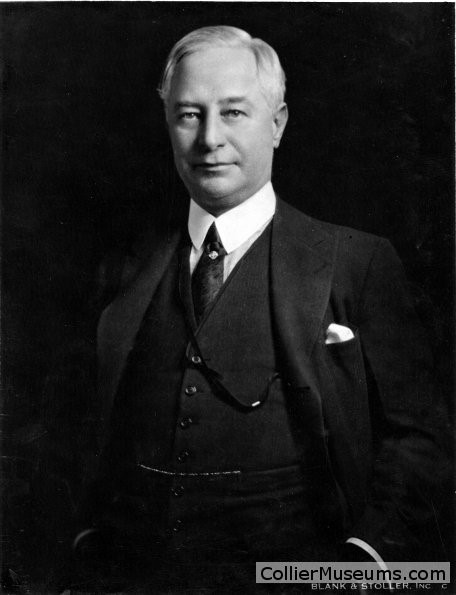 By 1927 advertising magnate Barron G. Collier (no relation to the Collier family) was building the Tamiami Trail, which would connect Florida’s east and west coasts through the Everglades. His vision included developing Marco Island, and he bought up large tracts of land on the Island; however, the Depression ended his dream for Marco Island.

At this time, tourists—especially those with trailers– began to discover the island. The Ideal Fish Camp, owned by Harry Pettit’s brother, was in operation in Caxambas as early as the Depression, and the Mar-Good RV Park, owned by Carnival personalities Reckless Rex and Reckless Ruby, opened in Goodland in the early 1950s.  Kelly Grantt had a fishing camp/motel in Old Marco, and the Doxsee Trailer Park operated at the former site of the Doxsee Clam Factory nearby.

In 1949, many private homes were moved from the village of Caxambas to Goodland to make way for the coming development by the Barron G. Collier family.  But despite the “Big Move,” no development of Caxambas occurred until the Collier family joined forces with the Mackle Brothers to develop the Island in the early 1960s. 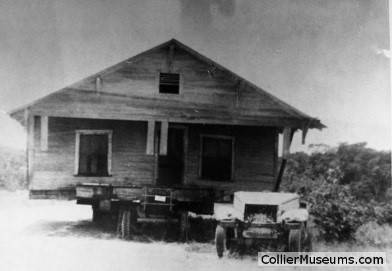 By Erika J. Waters, Ph.D., in association with Kathy Miracco and Craig Woodward.

Thanks for permission to use photos from the University of South Florida (Tampa) Library and the Collier County Museums photo archives.