From the Mackle Brothers to Today

In the early 1960s, Robert, Elliott, and Frank Mackle discovered Marco Island, after being introduced to the island by heirs of Barron Collier who wanted to develop his vast holdings. Starting in 1941, the three brothers had worked with their father in the family’s construction company.  The Mackle brothers founded the General Development Corporation in 1954 and the Deltona Corporation in 1962. They developed properties on Florida’s east coast, including Key Biscayne, but as Frank Mackle told Douglas Waitley, the author of The Last Paradise, “I couldn’t believe Marco the first time I saw it. . . . Just fantastic. I decided right on the spot to turn Marco into a paradise everyone could enjoy. . . .I wanted to develop the island for moderate income persons…I thought middle income people should enjoy the beauties of nature the same as the rich” (2) 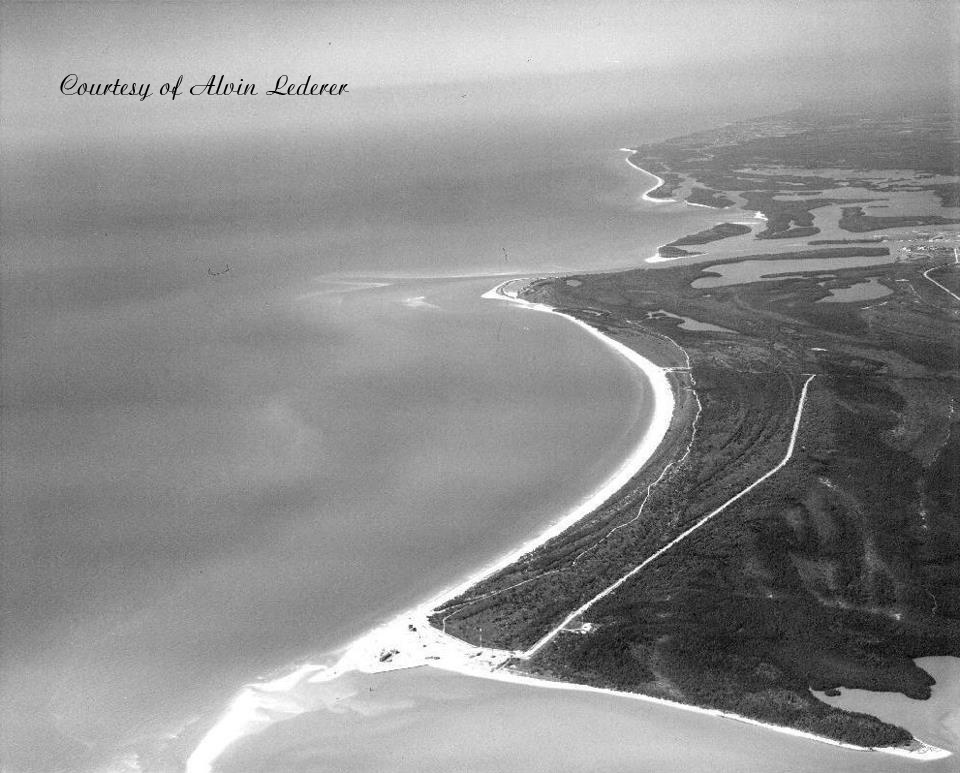 The plan for Marco Island was unlike anything the Mackle brothers had undertaken before. The Deltona Corporation exercised their rights to the purchase of the Collier’s shares that were held in the Marco Island Development Corporation in 1964 for $7 million dollars and proceeded to acquire the necessary dredge and fill permits.

Focusing on 6,800 acres, Deltona’s plan was to construct an ideal community with land allocated for churches, a town center, recreational areas, marinas, and hotels. Condominiums, including the Summit House where Frank Mackle himself purchased two units, would later be built along the wide beach that faced the Gulf.

The centerpiece was the Marco Beach Hotel (now the Mariott Hotel and Resort), designed in the Polynesian theme–and that included the famous boat. 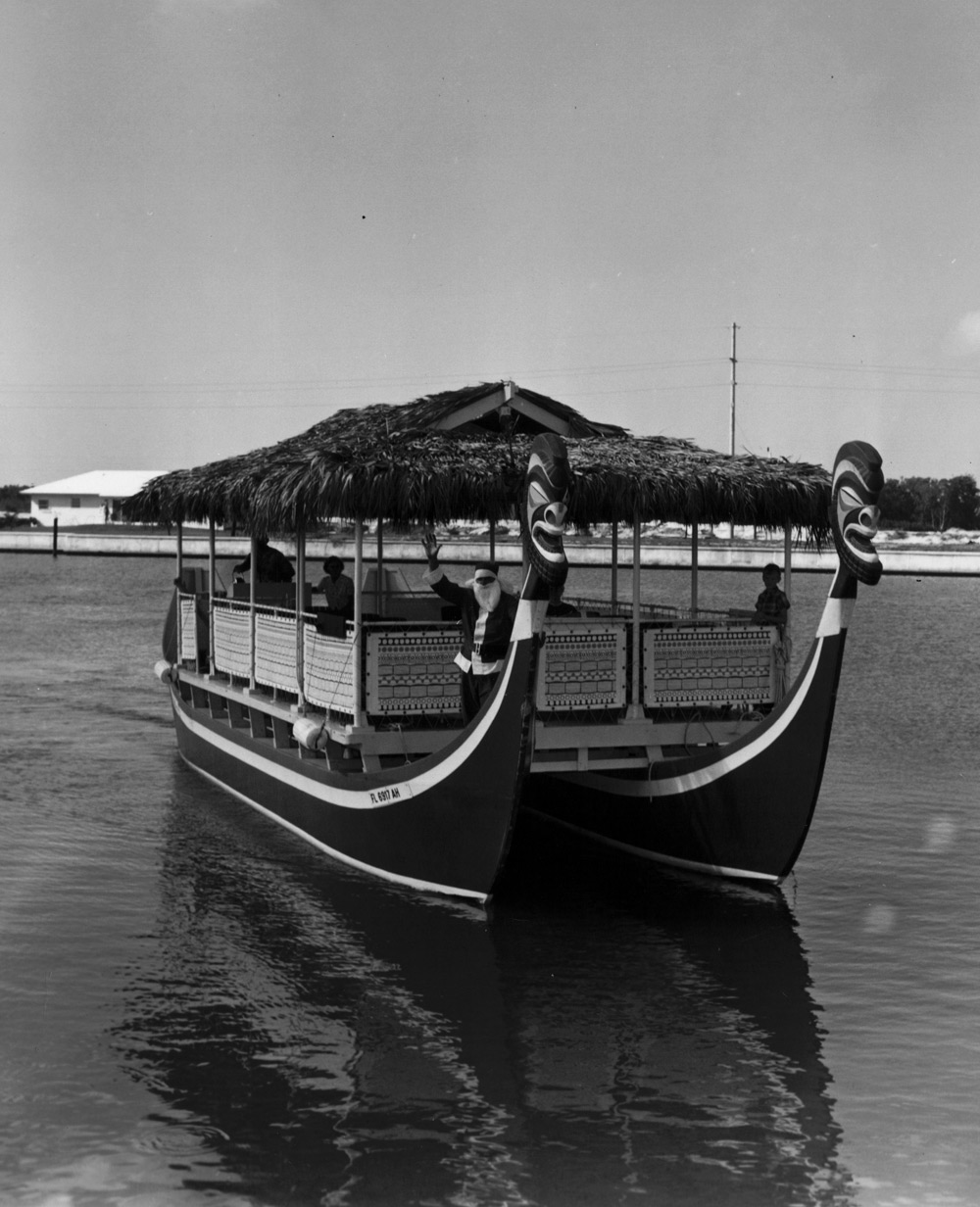 An extensive advertising campaign was launched, including special sections in the New York Times, reaching buyers across America and even in Europe. Prices for waterfront homes started at about $20,000 with inland homes at $15,000; lot prices varied from $2,550 to twice that. So successful was the promotion that 25,000 people arrived on opening day, January 31, 1965, according to Marion Nicolay writing in the Marco Eagle. The price list for villas in 1971 ranged from $35,000 to $58,600. By then waterfront home sites started at $12,500 and inland home sites started at $5,700.

The popular boat that sailed from a nearby marina shown here at Christmas. 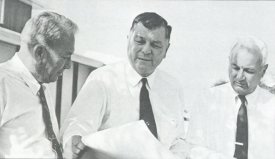 The three brothers’ personal and professional lives overlapped: they socialized and worked together, and at one point, even shared one large office with three desks. As Frank Mackle III has written, their relationship was “a source of pride and awe for everyone.” It was promoted to the public, and “everyone took great strength from the wholesomeness of the family and the team.”

In fact, though, the brothers had different personalities, with different family stories—and even tragedies. In 1968, Barbara, the daughter of eldest son Robert Mackle, was a student at Emory University, Atlanta, when she was abducted by Gary Krist and held captive in a coffin-like enclosure for 83 hours for $500,000 ransom before being rescued alive. 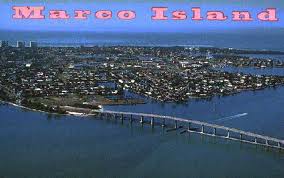 The Bridge to Paradise

The SS Jolley Bridge, later named for Steward Stockley Jolley, a Collier County judge who served from 1935-1959, and was one of the early judges who didn’t have a law degree, opened in 1969. It connected Marco Island to the north with U.S. 41, a great convenience. The toll was 40 cents entering the island and no charge leaving; later it was reduced to 20 cents.

This postcard of Marco Island proudly displays the Marco Bridge (later renamed the Jolley Bridge) which opened in 1969.

Marco Island was expanding at this time, including the debut of a weekly newspaper edited by Bill Tamplin called The Marco Eagle.

Life was changing elsewhere, too. In 1969 Congress approved the National Environmental Policy Act, and in October, 1972, Congress passed the Federal Water Pollution Control Act (now the “Clean Water Act”). In 1971, the Environmental Protection Agency came into being.

The Mackle Brothers suddenly found themselves in opposition to many government agencies. While earlier permits had been approved in as few as nine days when the impact on navigable waters had been the only criterion, now the US Fish and Wildlife Service voiced strenuous objections to their latest permit, the Roberts Bay permit. The US Army Corps of Engineers denied permits to dredge further.

‘This may be the last major development to take place in Florida,” David Gluckman, lobbyist for the Florida Sierra Club.

The Mackle brothers fought this through the courts with little success. By the mid- 1970s, litigation had taken its toll.  Elliott retired from Deltona in 1970. Robert left in 1976 leaving Frank Mackle, Jr. and his son, Frank Mackle III to continue together.  Finally, in 1977 Deltona reached an agreement with the US Army Corps of Engineers for a scaled-down version of its original development plan, one that would leave intact about 4,000 acres of wetlands

However, a new agency, The Florida Department of Environmental Regulations, now objected. Deltona sued for the right to continue and fought the decision all the way to the US Supreme Court. In 1982, when the Supreme Court refused to overturn the lower court decision, Deltona felt it was in their best interest to sign an agreement.  Long-time resident, Marco Island Historical Society board member, and attorney, Craig Woodward has noted that this particular agreement had the greatest impact on the island.  In it fifteen thousand acres of Deltona’s land, including part of what is now Rookery Bay Estuarine Reserve, were left untouched and all legal and administrative challenges ended. Deltona was assured of speedy permits henceforth, and the corporation received 50 acres near the Miami Airport.

Although Deltona was nearly bankrupt due to years of litigation, the corporation was determined to meet its obligations. It refunded money or offered substitutions to all its customers. This forced the company to sell most of its assets.

“Stockholders… may view with satisfaction the manner in which the Company, in the face of the permit denials, has moved to fulfill its obligations to its Marco Island customers by protecting their contractual and financial positions.” Frank Mackle, Jr. in a 1976 letter to stockholders 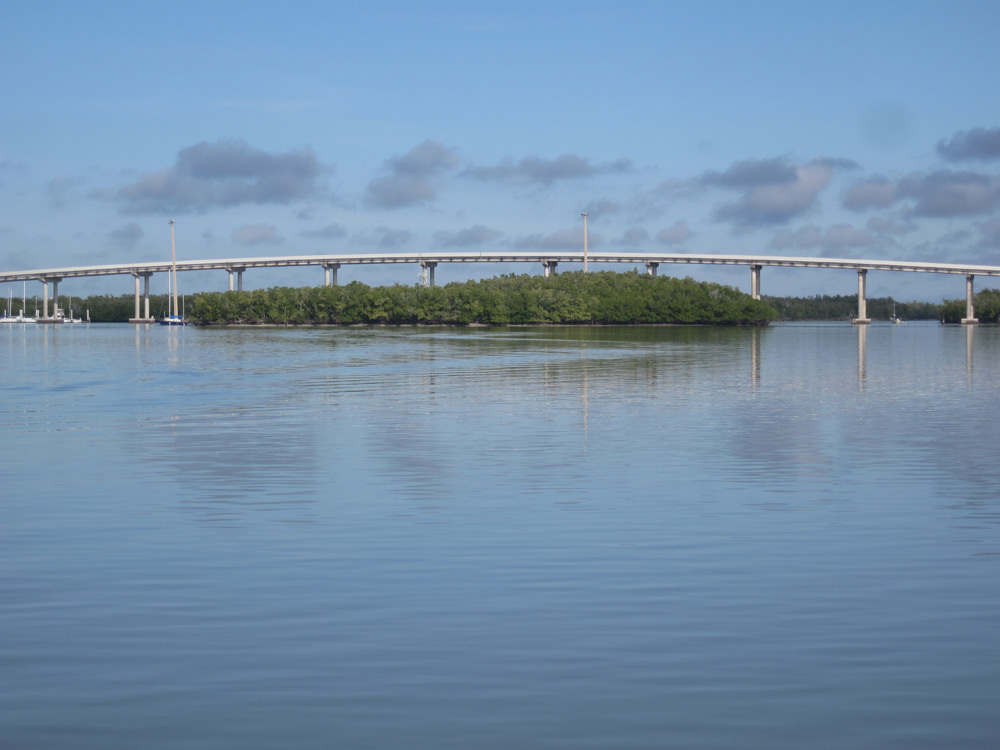 Although the swing bridge–a 1920s-era bridge from Fort Meyers that had been re-constructed on the southeastern part of the Island near Goodland had first provided the Mackle brothers with access to the island, they had paid little attention to that small village. Founded in the late nineteenth century, Goodland remained isolated until 1949 when 14 houses (as noted by historian Betsy Perdichizzi), from nearby Caxambas, another small village on Marco Island, were moved there in preparation for a development. A new bridge at Goodland was built in 1975.

The new Goodland Bridge was completed in 1975 and in 2013 renamed the Stan Gober Bridge. (Photo by Jennifer Casale) 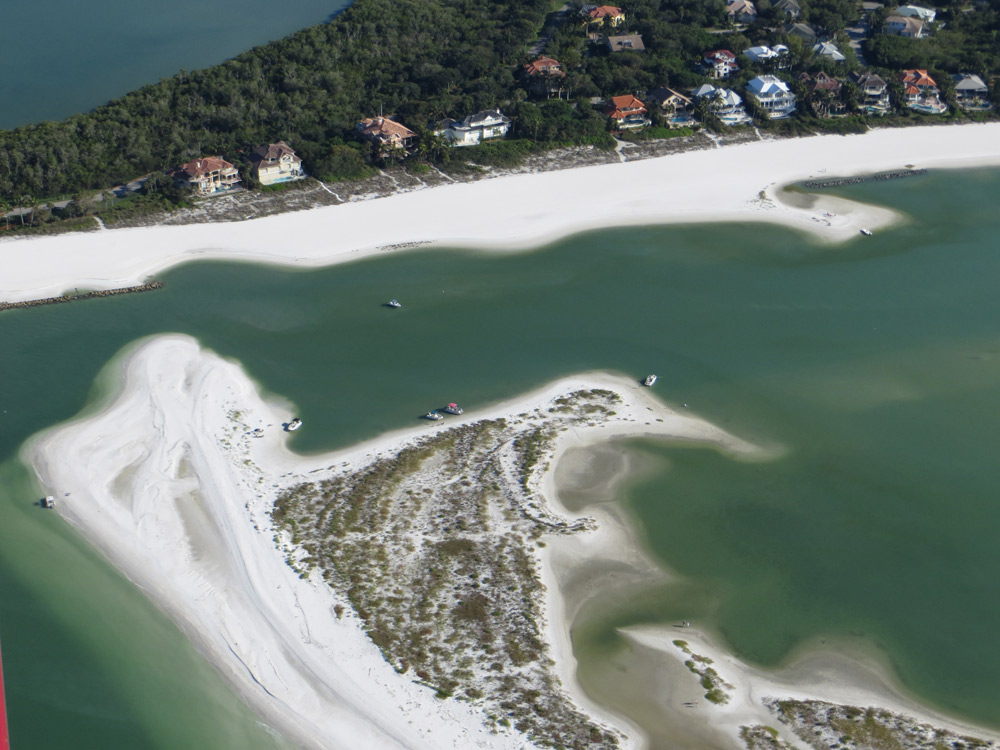 In the 1980s, Hideaway Beach a new subdivision was built on the northwest tip of Marco Island, in an area not owned by Barron Collier or the Mackles but formerly owned by the Ruppert family from N.Y. 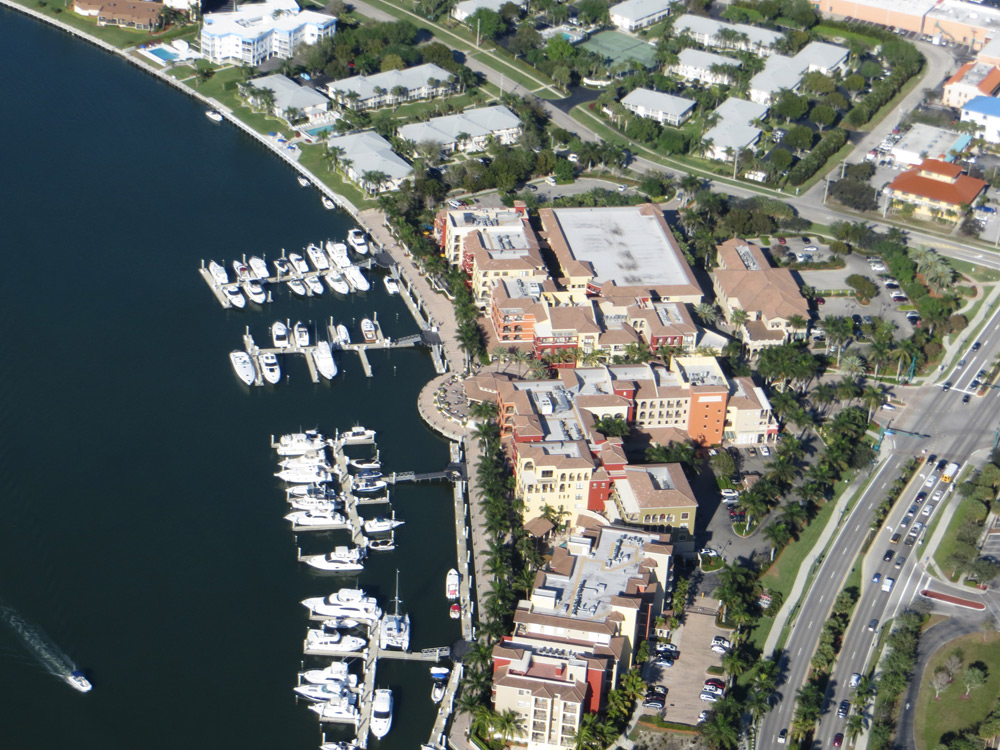 The Esplanade, a mixed use complex of stores, restaurants, a marina and condomimiums was opened in the early 2000’s (2013 Photo by Jennifer Casale) 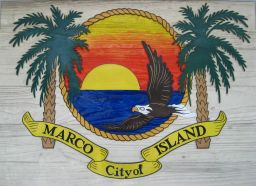 The City of Marco Island 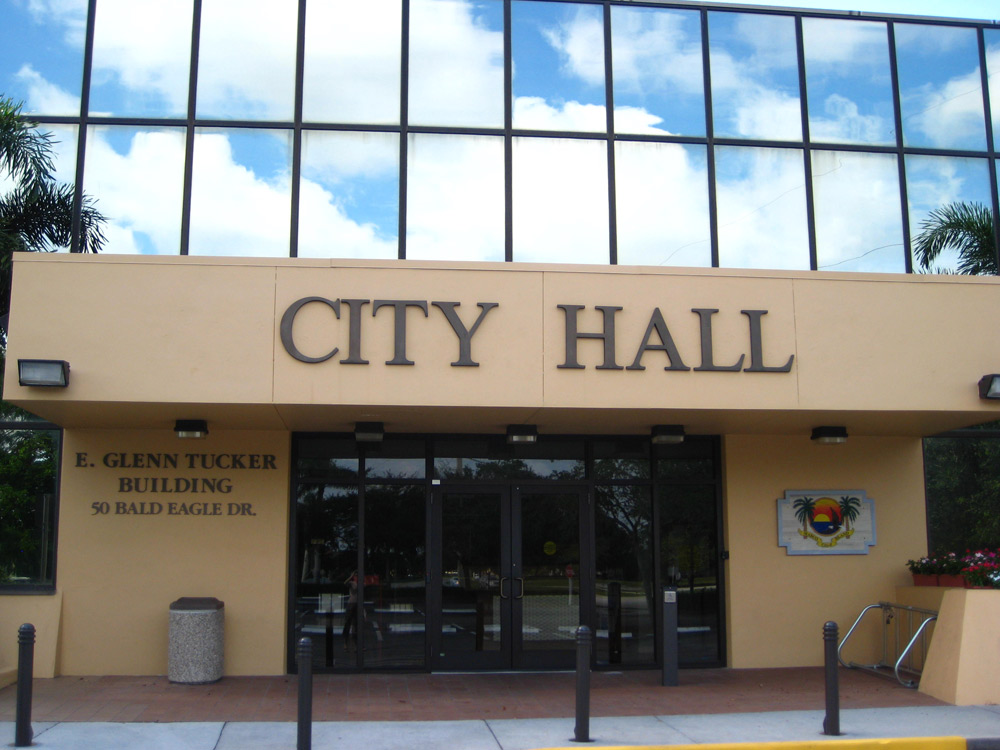 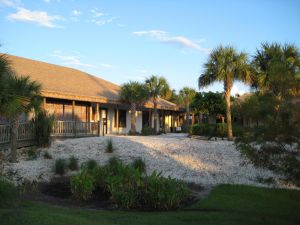 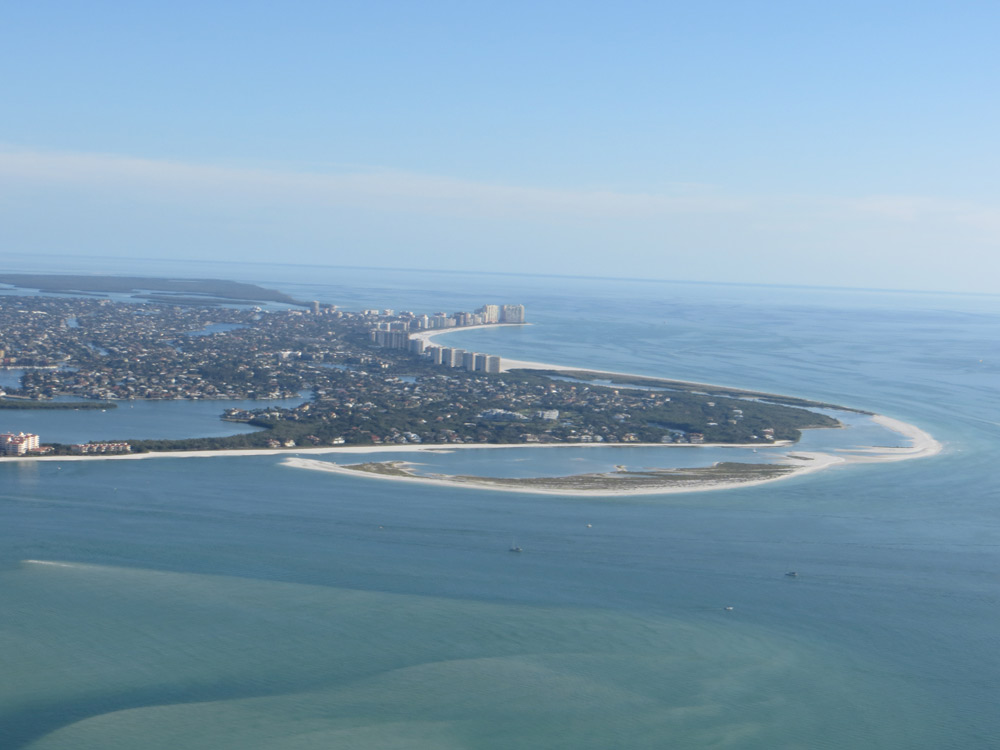 The Marco Island Historical Society wishes to express its gratitude to Erika J. Waters for her authorship of “Modern Marco.”  Sources of material used in the preparation include:

Waitley, Douglas.  “The Last Paradise:  The Building of Marco Island“